We use cookies to analyze our traffic and to allow the best experience possible. We also share information about your use of our site with analytics partners. Please click "accept" to consent to the use of such cookies. Without your consent, only the essential and functional cookies will be installed, which are necessary to display our website correctly.

Breast milk vs formula: How similar are they?

When deciding how to feed your baby, knowing what’s in breast milk or formula, the difference in cost, and the impact they have on health and sleep, can help you make an informed choice 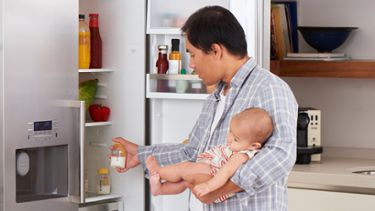 Let’s start by comparing breast milk to formula. There are ways in which formula is similar to breast milk: they both provide energy, hydration and nutrients, so your baby will grow whichever milk he is given.

But despite advances in how baby milk powder is formulated and manufactured, it doesn’t come close to matching the health benefits of your breast milk. Human milk has evolved over millions of years to be the perfect food for human babies. It’s much more complex than other mammals’ milk, as it builds our more complex brains and unique digestive and immune systems.

In contrast, cow’s milk, from which most formula is made, meets the specific needs of calves. It’s not safe for human babies to drink, so has to be processed intensively when made into formula for infants.

“Did you know the salt [sodium] content in cow’s milk is pretty much at toxic levels for babies?” says Professor Peter Hartmann, an internationally renowned specialist in breastfeeding and milk production, based at the University of Western Australia.

“In fact, in the early 1980s, cow’s milk was known to be toxic to laboratory animals such as rabbits or rats. These days, if any compound is toxic to a laboratory animal it’s not pursued in drug studies. So, by today’s standards, they wouldn’t have been allowed to make formula! Meanwhile mother’s milk has very low concentrations of sodium.”1

From colostrum that coats and seals your newborn’s stomach lining, to mature milk that helps your baby grow strong, each drop of your breast milk contains thousands of beneficial components, including:

One of the benefits of breast milk over formula is that it’s a living fluid. It adapts to your baby’s changing circumstances. So if your baby becomes ill, your body makes extra white blood cells and antibodies that travel into your milk and help fight infection.5

“The protective properties of mother’s milk are fundamental and unique to the evolution of lactation,”explains Professor Hartmann. “But we don’t yet have the data to understand the full extent of all the protective elements and what they do, as breast milk is so complex.

“Take oligosaccharides – there are more than 200 of them.11 They’re the third most abundant component of breast milk – yet we have little idea about what they do! They possibly have very complex structures because it gives them affinity for particular proteins, and when the oligosaccharide and the protein come together they have biological effects.

“Really, if you don’t know about it you shouldn’t muck around with it! Breast milk’s the normal thing.” Read more about breast milk in What’s in your breast milk?

Ingredients vary by brand and country, but typical baby formula milk is made of processed skimmed cow’s milk with added emulsifiers and stabilisers to help the oils and water mix when you make up the feed. It may also contain:

NB Different types of baby formula, such as goat’s milk, hypoallergenic and soya formulas, may have a different mix of ingredients.

“Scientists have shown there are more than 1,000 proteins in breast milk12 – and the best formula companies are looking at increasing just one or other of them,” explains Professor Hartmann. “What’s more, people have only just been able to synthesise some of the many oligosaccharides found in breast milk. So copying a couple of proteins and oligosaccharides is not going to get you breast milk!

“As far as cow’s milk is concerned, excess protein has to be added to bring the number of amino acids up to the level that baby needs,” he continues. “But that excess protein will be metabolised and broken down into components that can be converted into fat.

“That’s one of the problems with formula – babies do too well on it. Parents often think they’re doing fine because they’re growing like mad – but actually that may not be good for the long-term health of formula-fed infants.13 So formula companies are now trying to bring down protein levels in their milk to prevent babies from getting too fat.”

Look at the bigger picture when deciding whether to give your baby breast milk or formula. Breast milk isn’t just a food. It has an important protective function, reduces your baby’s likelihood of diarrhoea, gastroenteritis, ear infections, colds and flu, and thrush14–16 and halves his risk of sudden infant death syndrome (SIDS).17

You may have heard that breastfeeding your baby improves his chances of doing well at school,18 but did you know it’s been linked to better behaviour,19 eyesight20 and teeth alignment21 too? Your breastfed baby also has less risk of becoming obese, and his lifelong chances of getting type 1 and 2 diabetes,22,23 and certain cancers24,25 will be lower. Read more about breastfeeding benefits for babies. [LINK Benefits for baby]

Breastfeeding also burns up to 500 calories a day,26 which may help you lose weight more quickly after the birth. And the longer you breastfeed, the lower your own risk of developing breast,27 uterine28 and ovarian cancers,29 heart disease,30 and type 2 diabetes.22 Read more about breastfeeding benefits for mums.

Breastfeeding is usually easier on your purse. One estimate is that families who breastfeed exclusively save USD 1,200 to USD 1,500 during their baby’s first year.31

And while breastfeeding may not stop your baby waking at night, it will save time during feeds and help you both get back to sleep faster, so you can expect an extra 40 to 45 minutes’ rest each night.32

In fact, breastfeeding saves you more time in general, as you don’t need to do as much washing up, sanitising, boiling water and prepping bottles of formula – your milk is always ready at the right temperature.

In addition, the foods you eat flavour your milk so your baby experiences new tastes at every feed, and may enjoy a wider variety of foods when you start introducing solids.33 Breastfeeding could even encourage healthier eating, as research shows breastfed babies of mums who have fruit and vegetables regularly enjoy eating these foods more than babies of mums who don’t.34 Formula, meanwhile, always tastes the same, and even using different brands can’t recreate the complex flavours of your milk.

Finally, have you considered the environmental benefits of breast milk? With no intensive farming, factory emissions, transportation or packaging involved, breastfeeding is better for the planet as well as for you and your baby.

For more information on what’s in breast milk, read our free ebook The Amazing Science of Mother’s Milk now.

Weaning: When and how to stop breastfeeding

What are the benefits of breastfeeding for your baby?

What are the benefits of breastfeeding for mums?

What is mature breast milk?

Calma is an innovative feeding solution designed for breastfed babies. It does not interfere with breastfeeding and lets your baby feed the way they learned ...

The convenient way to store, carry and warm expressed breast milk, Medela breast milk storage bags are easy to use and hygienic. ...